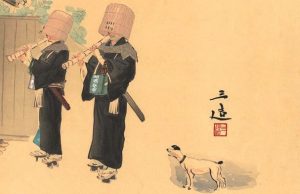 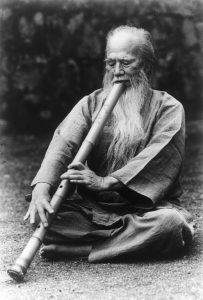 “The Kyotaku”
– by Koku Nishimura 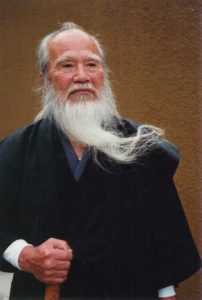 According to the ancient book of ”Kyotakudenki”, the Kyotaku is a bamboo wind instrument developed in the Tang dynasty (618 AD-907AD) by Chohaku, a disciple of a Zen monk, named Fuke. Chohaku´s flute was designed to imitate the tone of Fuke´s bell ”Taku”, which he used in mendicancy, religious begging. The flute was constructed with no finger holes, and only able to make a single pitched note.

During mendicancy Chohaku would follow Fuke, and just when the sound ”boon” of Fuke´s bell vanished into the air, Chohaku would reply the sound” buun” by using his bamboo flute – this is why the flute was given the name Kyotaku, which means ”False Bell”. However, Chohaku´s flute and its name disappeared a long time ago.

I have utilized very old traditional bamboo flute making techniques and after extensive research and a number of trials, I was finally able to complete my own Kyotaku design.

Originally my bamboo flute design had no name, however in 1954 I was invited to a cultural meeting with Shiko Munakata, Kan Misumi, Katsukiyo Koyama, Kanji Koyana and Koume Akasaka at the Nihon Club in Yuuraku-cho, Tokyo.

There I played a piece of music, ”Ajikan”, on my bamboo flute. After listening to the music, it was clear to the people gathered, that my bamboo flute was quite different from the Shakuhachi, in terms of the way it was constructed, the length and the sound it produced, and therefore needed its own name suitable to express its originality.

Aware of the story of Fuke and Chohaku they agreed, that Kyotaku was the appropriate name for my bamboo flute. And since then the bamboo flute I created has been called Kyotaku.

In creating a Kyotaku, its vitally important that utmost care is taken to ensure the resonant quality of the bamboo and its sound of nature.

With the deep low sounds, we can calm down our minds more than with shallow high sounds, and the longer a bamboo flute becomes, the lower sounds it makes. The quality of each Kyotaku is highly dependent on the quality of the bamboo, which is chosen with the highest sense of carefulness. Kyotaku making is a secret traditional craft and so far, it has not been possible to create a Kyotaku by using computer science.

In Japan there are now several dedicated schools, Dojo’s, which teach Kyotaku, and at each Dojo, the Dojo-master teaches his followers. Abroad, there are also many eager followers and fans of Kyotaku – in Denmark a CD by the name ”Kyotaku” was produced and sold internationally.

I am always impressed to hear Kyotaku being played around the world.

Kyotaku is played only for the true classical music of Zen.

Presently many people enjoy the majestic sounds of Kyotaku, whilst trying their best to hand down Kyotaku to the future generations of our world.